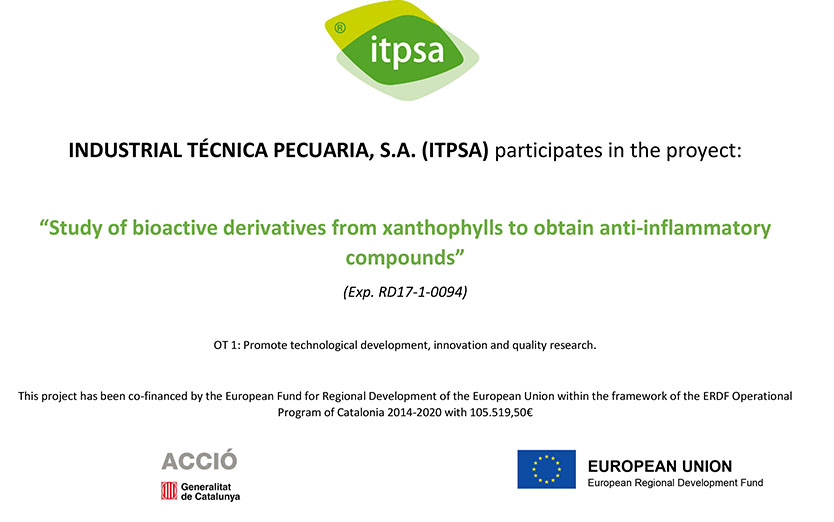 Written by admin. Posted in News

Preservation of gastrointestinal health is a key factor in intensive livestock production systems, with important implications on health, animal welfare and farms efficiency. In the case of swine production, the transition phase, which is the one followed piglet weaning, is a delicate phase of the production cycle due to the numerous challenges the animals must face, like sudden changes on feed presentation and social environment, that may produce intestinal disorders that lead to a high incidence of bacterial diarrheas.

Since the second half of the last century antibiotics were widely used as growth promoters thanks to its effects on intestinal physiology, feed conversion and growth of livestock. However, this practice was banned by the EU in 2006. Nevertheless, the removal of antibiotics as growth promoters has implied the rising use of antibiotics with therapeutical purposes due to the increasing incidence of infectious diseases. Consequently, the current situation is highly influenced by the concern associated to the emergence of antibiotics resistances in several bacterial species, supposing an important public health problem.

Xantal’s project (RD17-1-0094), co-funded by the European Regional Development Fund with the managing of ACCIÓ (Generalitat de Catalunya), is focused on the search of natural and effective alternatives to the use of antibiotics as growth promoters. The general objective of the project is to obtain and identify carotenoid derivatives with anti-inflammatory and immunostimulant properties to be used as functional ingredients in animal feeding in order to improve the gastrointestinal health. The carotenoid derivatives might represent innovative products with a high added value, no available in the present, and capable to give to natural carotenoids a different use beyond the pigmentation purposes to provide color to poultry eggs and meat.

During Xantal’s project execution, several enzymatic processes combined with physicochemical treatments (UV radiation) will be studied with the aim to modify the carotenoids and obtain derivatives with a higher anti-inflammatory and immunostimulant activity. On the other hand, the optimal encapsulation processes for the derivatives will be assessed too, in order to improve the stability of the bioactive compounds during feed pelleting and its release on gastrointestinal tract, apart from to establish formulation strategies and inclusion levels on swine diets. Finally, the anti-inflammatory and immunostimulant properties of the bioactive compounds will be evaluated using in vitro methodology (cell culture) and in vivo models (weaned piglets experimentally infected by pathogenic bacteria).

Cookies on this website are used to personalize content and advertisements, provide social media features and analyze traffic. In addition, we share information about the use of the website with our social media, advertising and web analytics partners, who may combine it with other information that you have provided or that they have collected from your use of their services. You can accept all cookies by pressing the "Accept" button or configure or reject their use by pressing the "Configure" button. For more information you can check our Cookies policy.
ConfigureAccept
Cookies

This website uses cookies to improve your experience while you navigate through the website. Out of these, the cookies that are categorized as necessary are stored on your browser as they are essential for the working of basic functionalities of the website. We also use third-party cookies that help us analyze and understand how you use this website. These cookies will be stored in your browser only with your consent. You also have the option to opt-out of these cookies. But opting out of some of these cookies may affect your browsing experience.

Necessary Always Enabled
Necessary cookies are absolutely essential for the website to function properly. These cookies guarantee basic functionalities and security features of the website, anonymously.
Functional
Functional cookies help to perform certain functions, such as sharing the content of the website on social networking platforms, collecting comments and other third-party functions.
Performance
Performance cookies are used to understand and analyze key website performance indices, helping to provide a better user experience for visitors.
Analytics
Analytical cookies are used to understand how visitors interact with the website. These cookies help provide information on metrics, the number of visitors, the bounce rate, the traffic source, etc.
Advertisement
Advertising cookies are used to provide visitors with relevant advertisements and marketing campaigns. These cookies track visitors across websites and collect information to provide personalized advertisements.
Other
Other uncategorized cookies are those that are being analyzed and have not yet been classified into a category.
Save & Accept